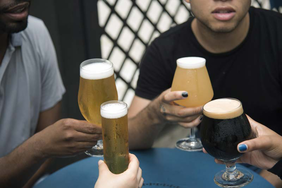 New beers, called "deglutenized", have recently entered the Quebec market. Sought to have been rid of the gluten contained in the cereals from which they are derived, these beers make it possible to increase the food supply for celiac consumers. The Canadian and international standard sets a threshold of 20 ppm (parts per million or mg / kg) of gluten in consumer products for celiacs that may be labeled "gluten-free". In other words, the process for the removal of gluten proteins must be efficient enough not to leave residues beyond this value, so as to be without the risk of causing adverse health effects for the vast majority of people. celiac people. The most recent scientific studies indicate that celiac people should not consume more than 10 mg of gluten per day to avoid acute and chronic health problems.

Unlike gluten-free beers made from raw materials that do not contain gluten such as millet or buckwheat, "degluterized" beers are made from grains such as barley and wheat, which are sources of gluten. Manufacturers of these new beers applied enzymatic processes to degrade the gluten that was originally present. At present, it is up to the manufacturer to decide if his process is efficient enough to eliminate the protein fractions considered to be toxic to the celiac consumer. It is on this basis that manufacturers can then use the term "gluten-free" on their products.

In theory, it is possible to achieve a level of hydrolysis of gluten such that the toxic compounds for celiacs are degraded to a sufficient degree to ensure the non-toxicity of the product for celiac consumers. It is important that the manufacturers of these products make available information related to their approach to evaluate the safety of these products and the reasons for which they can avail themselves of the "gluten-free" claim such as their validation data. This could be done without harming the intellectual property associated with innovative processes.

It is important to remind celiac consumers not to risk drinking these beers like any other gluten-free product without having the necessary assurance that it is appropriate for their health condition. In the absence of any relevant information, it is not recommended to rely on its symptoms after consumption of these beers to conclude that these products are or are not dangerous for the individual trying them. Indeed, taking into account the modes of action of celiac disease, not detecting symptoms does not necessarily mean that the product has no adverse effect on the intestine.

Until more information is made publicly available on these processes, we come to wonder if it is not wise that such products from innovative processes and claiming to eliminate the danger that try to avoid celiacs, by following their gluten-free diet, should not be subject to prior approval or a higher level of supervision by regulatory bodies, which could, on the basis of scientific evidence, decide on adequacy of such an allegation prior to their appearance on the Canadian market. Considering the importance of the negative impact on health that a non-compliant product could have, in a chronic way, such a reflection on the evolution of the regulatory context of gluten-free products is necessary.