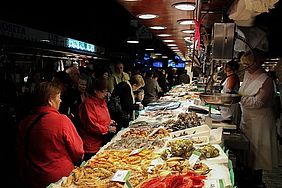 Oceana Canada's most recent release presents the results of a survey of seafood fraud that started in 2017 and ended recently and which spread from Vancouver to Halifax. Nearly half (47%) of the 472 samples analyzed by DNA testing was mislabeled.

Several types of fraud are referenced by Oceana:

- Substitution: a species of fish sold as a more expensive species (think of tilapia sold as snapper)

- Mislabelling of the fishing practice: fish sold as wild while it comes from a farm

-More serious than these two other cases: fish that pose potential health hazards (banned from several countries) sold as another species.

The major cause of this fraud can be explained by the system of traceability of fish products from boat to plate. Indeed, before being sold to consumers, the fish follow a long journey with many middlemen and therefore many opportunities to lose information on the fish.

Ocenana Canada is calling on the Canadian government to "government to swiftly implement boat-to-plate traceability in line with global best practices."

The article can be read in English here.