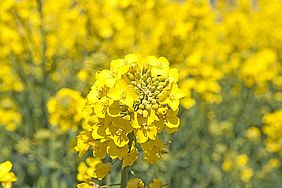 Health Canada released a report on the presence of mustard in food samples but found out that it was actually canola. The ELISA test used could not tell the difference and falsely indicated the presence of mustard. Since mustard is a priority allergen, it was important to confirm that cereals (the basis of many products such as cakes) were contaminated with mustard to determine whether to indicate the presence of the allergen on the packaging.

This is called a false positive: a test indicates the presence of a contaminant while this substance is not there. The test in question is an ELISA test and seemed to fail distinguish between mustard and canola. For example, cereal samples tested by Health Canada in 2016 were, according to ELISA, contaminated with small amounts of mustard. This news could have serious consequences for people with mustard allergy who might be at risk if they would consume products containing these cereals. In addition, agri-food companies should also have identified the possible presence of mustard on all products containing these cereals. Health Canada has sought to confirm the presence of mustard with another LC / MS / MS detection method. This method has highlighted canola and not mustard. The article presented here summarizes Health Canada's analyzes and conclusions on this issue.