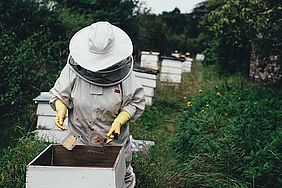 Honey fraud is one of the most occuring fraud in the world. Canadian Food Inspection Agency has recently detected fraud in honeys sold in Canada.

Each of those questions require one test which can be expensive, time consuming, and a fraud can be missed.

Instead of looking for one fraud or another (called targeted detection: when you look for a fraud in particular), it is possible to test a honey sample and compare its profile to known honeys profiles. Nuclear Magnetic Resonance can achieve this profile database. M. Awram is working on recording Canadian honey NMR profiles to create a Canadian database with the support of the Canadian Food Inspection Agency. Following the database establishment, any new honey sample analysed with NMR will have its own profile; this profile can be compared to known honeys in the database. A unknown profile can be annoted as suspect, because differences could be due to adulteration. This approach is called non-targeted detection, the operator is not looking for a particular fraud but for a suspect profile.

It is wothrnoting that non-targeted methods rely on the quality and the accuracy of the database. The database needs to cover all the different kinds of honeys in terms of origin, manufacturing, flowers, seasons, organic or not etc.